KRAV MAGA IS ABOUT A LOT MORE THAN JUST FIGHTING. 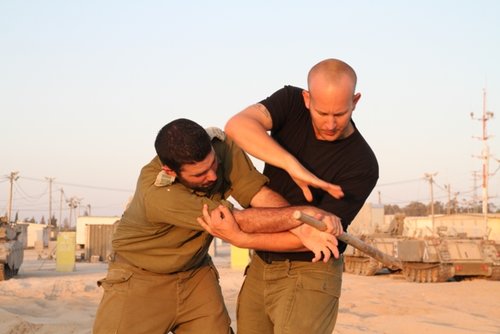 Krav Maga was developed by the Israelis in the 1940’s to train their soldiers to protect themselves in some of the most dangerous environments on the planet. The Israeli’s needed something that their soldiers could learn in a relatively short time and that was devastatingly effective against a wide array of threats. Their answer was Krav Maga.

In the 1970’s Krav Maga spread beyond the army and was adapted for civilian use. It proved incredibly effective for civilian self defence because of it’s focus on surviving violent encounters rather than winning fights within a limited set of rules.

Once it spread beyond the Israeli army, Krav Maga was quickly adopted around the world by military and police forces, as well as civilian martial art schools. Its popularity was largely due to its logical approach to real violence and it’s effective techniques which are based on the body’s natural instinct and reflexes; this is what also makes Krav Maga quick to learn and practical to use.

Today Krav Maga is taught exclusively in every branch of the Israeli protective services where it continues to develop. It is the the number one choice for military and police forces in the world. And it is taught in civilian Krav Maga schools in virtually every country on the planet.

Krav Maga is a system that continues to develop. As knowledge grows and as the nature of threats around the world change, Krav Maga as a system adapts and grows to meet those threats.