How big a concern is violent crime for women in Texas? Late last year Texas DPS released a Texas crime analysis with chilling statistics. In 2016, there was one murder every six hours and a rape every 40 minutes. Every 16 minutes someone committed a robbery, and every 7 minutes a Texan was the victim of violent assault. Add those numbers together and you have one violent crime every four minutes. Just in Texas. 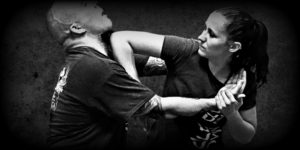 Those statistics provide a compelling case for Texas women to learn to defend themselves, and they should. At East Texas Krav Maga we teach individuals to respond aggressively and decisively when there’s a threat, even if that threat includes a knife or gun. We don’t just offer routines and rituals because we know sometimes that type of women’s self-defense is not enough. The threat involves the mind as much as the body. In this article, we want to focus on the danger of violent assault to women. Our self-defense for women and men doesn’t just focus on curriculum, but on developing a mindset that turns individuals from potential victims into confident weapons. Violent Assault and Women – Statistics Government agencies just released in 2017 what happened in 2016. An FBI report showed there were an estimated 1.2 million violent crimes that year in the United States. Of those, 95,730 of them were rapes. In the U.S., one in five women will be the victim of sexual assault. Overall property crime has gone down, but rape, murder and aggravated assault has increased. Texas Women and Violence The national numbers are staggering, but when you think about the whole United States, those women seem far away. Here are some of the numbers from the Texas Council on Family Violence: • In Texas during 2016, a man killed his wife or girlfriend every 2.5 days. • One in every 10 murders in Texas overall happened when a man killed his female partner. • 68 percent of the time, the killer used a gun. • Murdered women ranged from age 15 to 92. The majority of those killed were between 20 and 39 years old. • 146 women died in Texas, plus an additional 24 children and adults. East Texas Women and Violence Of the 146 women who died in Texas, eight of them were from the East Texas area. KETK published a list of their names to honor their memories. Most died of gunshot wounds. One died two days after her assault from severe head trauma. In several cases there were children nearby when the assault happened. The Biggest Threat Women’s self-defense scenarios often focus on what might happen when a person is walking to her car in a dark parking lot or shopping on the wrong side of town. Pictures show an assailant who jumps out of the shadows wearing a hoodie to mask his identity. The problem is, that’s not often how it actually happens. Let’s look again at the Texas statistics. • When experts analyzed shootings across the nation, between 2009 and 2015, 57 percent of them involved someone killing their intimate partner. • In Texas 35 percent of the women murdered were wives killed by their husbands. Another 12 percent were separated from their spouse. • 32 percent of the murdered women were girlfriends. • 68 percent of assailants shot their victims, 15 percent stabbed them, six percent strangled them and four percent beat them. That’s just murder statistics. Women are also much more likely to be raped or assaulted by people they know than by a stranger hiding in the shadows. The biggest threat to women, the one that might end their life usually comes from someone she knows. This creates a problem. Women often say they might be comfortable using violence to protect themselves from an outside threat, but they’re unprepared when assaulted by someone they care about, someone who is supposed to love them back. What can a woman do when she is caught off guard, overpowered by someone stronger and facing a threat? Women’s self-defense classes rarely take on this complex problem. Every woman’s situation is unique, and we don’t pretend to have all the answers, but we do acknowledge the problem and encourage an environment of respect and support. As a result, some of our female students have been courageous enough to share their stories in the hope of helping other women experience freedom from abuse. Understanding The Heart of the Issue Women of all races and socioeconomic groups are equally likely to be hurt or killed by their partner. Nonprofit organization Domestic Abuse Shelter says in most cases, domestic violence doesn’t happen because one person loses control, but because they’re using anger and pain to gain control. It seems on the outside their temper takes over, but that’s because they are excellent at manipulating others. Domestic violence is a pattern of behaviors. The point is to achieve compliance or control. The problem is in the heart. The woman might feel emotions like love, fear, guilt, dependency or inferiority. Sometimes their emotions keep them from taking responsibility for their own safety. Then when things go terribly wrong, they don’t know how to react. Developing the Right Mindset If you talk to students at East Texas Krav Maga, especially the ones who came for women’s self-defense, you’ll hear these recurring themes: • ETKM training leads to increased confidence. We regularly expose students to physical and mental stress and coach them on how to fight through. They learn their own persistence and find inner steel. That spills over into other areas of their lives. • Self-defense classes at ETKM replace fear with action. When you practice an aggressive response over and over again it becomes automatic. You don’t freeze, even if you’re in a less than advantageous position or you see a weapon. • Women’s self-defense lessons from ETKM teach students to protect others. If they experience an assault that involves their loved ones, they already know how to respond. We also teach students they’re too valuable to lose. When people of any gender truly know their worth to their family members, the community and the people at our gym, they realize no one has the right to harm them. They turn that outrage into aggression. Even if an attacker catches them off guard, they will turn it into a very bad day for that attacker. Domestic violence and violence against women is a very real problem in East Texas. We want to help in any way possible. We’re committed to raising awareness, to providing information and resources and to training women who might be assaulted, but will never be victims.